And we will accept Greenies!!

Many thanks to Miss Wendy who made us these AWESOME avatars! I'm an excellent wolf, and how perfect that Hammy is one of the three little piggies! *noming on Hammy's tail*

Links to this post
Labels: *rumble*, d'Artagnan Rumblepurr, Diego is a ham

Which end is up - Rumblepurr

Soon I will not need my beloved mink blankie... and there will be sunpuddles! 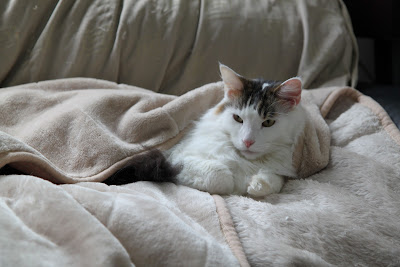 If you haven't seen it already, check out our pal Katie and vote vote vote for her cool video!

Hello my friends! I'm gonna do something I've NEVER done before... review some BOOKS!

Rumblemum has been reading me some very special books, written by friends of mine from the Katz Tales blog.

Katz Tales The Adventures Of Scoop and Au - telling the story of two handsome man-cats in Malaysia, this book gives insights not just into the titular characters, but also to the relationship I have with Rumblemum. The 15 stories in this book are funny, touching and always entertaining.

Katz Tales Au And Target The Early Years - The second book really hit home for Rumblemum - it takes place after the loss of sweet Scoop, and adds new little brother (Target) to the family. These stories reminded Rumblemum of how I had to learn to be a big brother to that Ham, after being the little brother to Inigo for so long.

While I don't read many books, Rumblemum does. She says that these stories are remarkable - incredibly well written and the type of stories you stay up to finish.

The proceeds of the books go to the Trap Neuter Release of feral kitties, so you're not just buying very cool novels you're also helping some unfortunate kitties to a better life. Priced at $2 USD for digital copies you can't go wrong!

It's HAMMY here! I have a dilema that I'm hoping you can help with. I'm BORED of my toys!

I used to love Da Bird, but lately I'm meh about it. Rumblemum has tried all the different attachements but no dice. Same with the laser. Just not interested. But I want to PLAY and I mew mew mew so sadly!

What do you guys recommend?

Links to this post
Labels: Diego is a ham, Diego Moonfur, Hamlet

I've been asked to post a sponsored post on behalf of VioVet (based in the UK) about the troubling obesity issue in pets.

As the UK has been confirmed as the fattest nation in Europe, it is unsurprising that our pets also struggle with their weight. It has even been predicted that by 2020 over half of the pets in the UK will be obese and there is soon to be a pet stair lift on the shelves.

People laugh at overweight pets even more so than they do at people and, granted sometimes it can be amusing to see an overfed Dachshund or pug, like Dennis Quaid’s ‘Pudgy’, waddling along (their legs are short enough as it is) it simply isn’t fair to the animals to allow them to become so unhealthy.


It is not just dogs that get overweight. Indeed, last year, my cat Bobby put on a bit of weight after having to be on a special diet to manage his urinary tract disease. Luckily, helpfully, once he had recovered, I discovered that there are other special diets to aid management of animals prone to obesity and who are overweight. I began by using Hill’s w/d. One of my main concerns was the possibility of Bobby continuing to lose weight past the point of the ideal weight but the maintenance of the ideal weight is one of the key features that Hill’s includes.


Unfortunately, as Bobby is so fussy, after about two months he decided he was bored of this food and refused to eat it so I had no choice but to search out another. So then I bought Purina OM which claims to do the exact same thing and I have had no problems with it at all.

Some people prefer not to change their pet’s diets if they know their pet’s food tastes are fussy, in which case the best thing to do would be to make sure they get the exercise they need. For indoor cats this means making sure to have a lot of play-time and toys. With dogs you can really get involved and dog toys are a great way to do so.

And in conclusion, here is a handsome photo of me!

The face of an angel - Rumbles

My friends on Facebook will have already seen this one, but look at what an angel I am! I am not at all like that brother of mine, who sits and begs for ham! I just flash this face and wait for the ham to come to ME!