Much more optimistic today. Inigo doesn't seem himself, but I'm hoping that's just the combination of being away from home, medication, and all the strange sounds.

They did pull out some more fluid, but it wasn't as much. His blood pressure is ok, but his kidneys are not doing so well because of the diuretic. They've started him on an ace inhibitor, that should help.

We hope with all that we have that being home will see him brighter and more energetic, and that he'll start eating more.

Rumbles is so out of sorts. He doesn't let us out of his sight when we get home, and he cuddles us both lots. He snuggled up to me in the same way Inigo does, I think he knew I needed that.

I've got photos of him that I'll post soon - been having issues with the laptop so a lot of my updates have been from my phone or ipad (hence some of the odd spellings or grammar - auto-correct is a funny thing) I'll also be able to start visiting more once the laptop is sorted.

We're so blessed to know so many kind friends here in the blogosphere and twitterverse and facebook. Your support has meant more than you'll ever know.
Posted by dArtagnan Rumblepurr/Diego Hamlet Moonfur at 7:31 PM 41 comments:

We went to see Inigo at the vet today. He was so bright and happy yesterday, and he'd been eating so well... today he was not so bright.

He purred at us, and was trying so hard to be himself, but I can tell he's not well.

There is a very real possibility that he's got more fluid in his chest. We'll know more tomorrow as the vet will x-ray him in the morning. If it is more fluid... well we're running out of options.

I know I've asked a lot of you all, but please...please... purr or think good thoughts for my gentle boy. I'm hoping against hope that he was just not hungry when we came by, and that there is no more fluid in his chest. He's such a good boy, loves to be loved, and always there with a cuddle if we were feeling down.

Rumbles is not himself either, he keeps looking for his big brother.

Please keep him in your thoughts for tomorrow.
Posted by dArtagnan Rumblepurr/Diego Hamlet Moonfur at 8:50 PM 58 comments:

Back at the vet

An update on Inigo: he was fainting again on the weekend. He's been in to see the kitty cardiologist today and she wants to keep him for the next couple of days. The fluid is back in his chest, and she had to drain it again.

The rumble parents were so happy to see him back to his normal self. He must have been in so much pain with the low blood pressure and fluid build up. He purred SO loud, and he was happy to see Thwack and his brush. He ate quite a bit which was good, since he hasn't really been eating on the weekend.

We're all hoping the new medications will help. We can't stand to see him suffer, he's such a sweet and gentle boy.
Posted by dArtagnan Rumblepurr/Diego Hamlet Moonfur at 6:29 PM 46 comments:

Inigo had another fainting spell on Sat. He hasn't been himself, and he hasn't really been eating as he should be. He seems so very sad. Rumblemum and dad are watching over him, offering him tuna water and any other noms they can think of.

Rumblemum has been watching The Tudors, and she's now calling me Lord Rumblingpurr and Inigo is Prince Cuddlington of the Floofingshire.

An update on Inigo

Inigo had his appointment with the specialist yesterday, she was very lovely and couldn't stop admiring what a kind and cute little man he is. We likes her very much

She removed the excess fluid from his chest, and gave him some new meds. One of the new mess was to stimulate his appetite, much to the dismay of Rumbles... For the first time Inigo pushed Rumbles out of the food dish!!

He seems more himself thank heavens. Rumbledad is working from home this week to watch over him

He goes back to the specialist on Friday, and we'll know more then

Thank you to everyone that is thinking of hi
Or purring for him... It means a lot to is all
Posted by dArtagnan Rumblepurr/Diego Hamlet Moonfur at 11:52 AM 58 comments:

Rumbles has been freaked out since Inigo got back... we assumed it was because he smelled like vet. We tried the towel trick and got some Feilaway and figured it would fix itself in a couple of days.

Well, we're on day three and now Rumbles is hissing at Inigo. He still seems more afraid than anything, but this is so out of character for Rumbles. He's usually SO easygoing, and he loves his big brother.

Rumbles slept next to me almost all night (and this is also a bit out of character, he usually sleeps on me or on the other side of me) and Rumbledad slept on the sofa so he could keep an eye on Inigo (who slept on his fave chair)

Has anyone got any experience with this or any advice?

I'm sorry to be hogging the blog ;) and I'm sorry I haven't been visiting... things will hopefully settle down soon.
Posted by dArtagnan Rumblepurr/Diego Hamlet Moonfur at 11:58 AM 40 comments:

Thank you all so much

The vet has let us take Inigo home early. He was looking so much better when we went in to visit, and he perked up when he saw us. The vet thought it would be more healing for him to be at home where he felt safe and would eat (he hadn't eaten at the vet)

We've just gotten home, I'm not letting Inigo out of my sight. Rumbles is afraid of him because he smells like vet. I suppose that's a good thing, it'll keep him from trying to chase Inigo or play with him. And he didn't try to steal Inigo's food (he ate a lot! *happy dance*)

We've got to take him back in on Monday for a checkup, and we have all kinds of med's he'll need to take. We've also got a specialist appointment with the heart doctor.

I know he's heard all your purrs and well wishes, and I bet you could hear his purrs, he's been purring so loud!! Thank you all.
Posted by dArtagnan Rumblepurr/Diego Hamlet Moonfur at 5:06 PM 54 comments:

Thank you all so much for your kind words and your purrs.

We're very fortunate to have gotten a chest xray of him, he'd been treated about a month and a half ago for what we all thought was asthma. He responded really well to the steroids, so when he was having trouble breathing yesterday we thought it was the asthma. He stayed at the vet overnight, and I spoke to the vet this morning, and we decided to get him xrayed.

What the xray showed was a really, really large build up of fluid around the heart. His poor lungs were crushed by it, and his heart is pressing on his air pipe. This is what was causing the breathing problems, not asthma as we'd thought.

The doctor has removed a lot of the fluid, and his after xray looks much better, but they believe it is cardiomyopathy, which means that his heart is potentially failing.

We're going to take him to a specialist when he's able to travel, but the vet he's at is very, very good. He'll need to stay there till Monday at the earliest. He's getting the best possible care and he purred a little when we were giving him cuddles. I brought Thwack in to keep him company and one of his fleecy blankies. I also gave him his favorite Greenies, he sniffed them which was a positive sign.

Please keep purring for him. He is such a good boy, and so young.
Posted by dArtagnan Rumblepurr/Diego Hamlet Moonfur at 4:19 PM 86 comments:

My sweet boy is at the vet. We thought it was asmatha, but it's his heart.

Please purr for him today.
Posted by dArtagnan Rumblepurr/Diego Hamlet Moonfur at 10:14 AM 43 comments:

WHAT is the MEANING of this? - Inigo

You better not be coming near ME with that, Rumblemum. 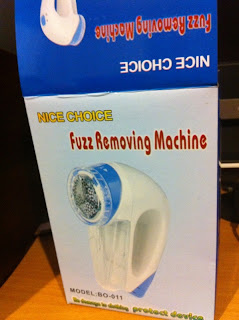 There can only be one - Rumblepurr

Now you all probably know that I loves the ladies.

It's hard when there are so many BOOTIFUL lady cats and only one Rumblepurr. I thought I'd found a solution...

I like my bed. It is soft and has Thwack in it.

I love my bed. It is soft and has Baby Duck in it. 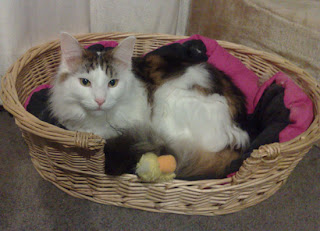 We didn't want the Rumblemum to leave us this morning.

Joining forces, we figured the best way to keep her in bed.... CUDDLEPILE!!

She had the quilt pulled up over her ears and she was lying on her tummy. Rumbles FLOOMPED himself up her spine, resting his mighty paws on her head.

I had her captured in the teddy-bear cuddles - I lay beside her and let her cuddle me like a bear.

We almost had her!! But in the end she made the horrible decision to leave us.

We'll need to come up with a more compelling plan for tomorrow...
Posted by dArtagnan Rumblepurr/Diego Hamlet Moonfur at 7:18 PM 34 comments:

Labels: Inigo and Rumbles, vengeance thy name is pussycat

Just wanted to let you know that we're all ok. We got quite a shake, but nowhere near as bad as the other island.

Rumbles thinks that it happened because of him (he was purring a lot at bedtime, he thought it was his RUMBLE that started it...) he ran under the bed and stayed there (he CLAIMS he was protecting the dust bunnies *snort*)

I stayed on the bed with Rumblemum and dad. I know if they're there that I'm safe.

So for everyone wondering what that naughty Rumbles was doing yesterday... he was *quiet voice* on one of the  speakers!! AND he was thinking of jumping up to the one shelf in the house he can't get to (it's where Rumblemum has to keep all the knicknacks now)

We're so touched that so many people were worried for us. Thank you my friends.
Posted by dArtagnan Rumblepurr/Diego Hamlet Moonfur at 11:36 AM 41 comments:

An afternoon with Rumbles - Inigo