It's my BIRTHDAY! In honor of this very awesome occasion, I invite you all to participate in a BIRTHDAY BLAST!

My sweet pal Miss Gracie has done up some excellent graphics for the occasion, so everyone grab a plate, fill it with noms, eat em then smash da plate - cause it's that kind of party! I've volunteered Hammy to do the clean-up, so don't hold back!


And the best for last - look at what Miss Gracie got me!!! It's my own JET! So now I can jet over and visit you guys, get cuddles and smoochies and be back without the Rumbleparents noticing!! I'll even let Hammy be my co-pilot (as long as he salutes me every time he sees me)

Thanks to the very sweet Miss Gracie, and thanks to all my friends in the Blogosphere, Facebook and Twitter. I feel very lucky to know you all.
Posted by dArtagnan Rumblepurr/Diego Hamlet Moonfur at 6:03 PM 59 comments:

We are SO happy we forgot to snub her!

We raced over to greet her and smell all the new suitcase-y smells. We smelled that far-away cat but chose to ignore that *glaring at Rumblemum*

She brought us a wonderful gift - but it's so warm here today that we didn't feel like playing too much.

Here's a photo of us being cat-loafs. I have the tail end of our new toy in my paw.

We've gotten some AWESOME gifts and awards from our friends out there, we'll post on those soon. Rumblemum is still getting over her jet lag and is thinking of stalking the Hobbit Premiere tomorrow... so we'll see how we go with posting this week :)
Posted by dArtagnan Rumblepurr/Diego Hamlet Moonfur at 6:53 PM 42 comments:

Well my friends, still no Rumblemum. Apparently she is somewhere cold called 'Canada'. HaHA Rumblemum! Without our cuddles you will be FREEZING!

Oh! Did you see me as 'Hot Mancat of the Blogosphere'? *strut* *strut*
Posted by dArtagnan Rumblepurr/Diego Hamlet Moonfur at 3:15 PM 53 comments:

It's been DAYS since we've seen our Rumblemum! We thought she might just be hiding, so we launched a full scale search.

Hammy (who is just silly) thought she might just be inside the flashy box, so when Rumbledad brought it out, Hammy gave it a close up look.


I thought she might be hiding in a new bag that Rumbledad brought home. It had really enticing crinkly paper, so I could see where she'd want to hang out inside.

Neither of these seemed to work. The hunt continues.
Posted by dArtagnan Rumblepurr/Diego Hamlet Moonfur at 11:15 AM 45 comments:

Once I figure this out - Rumbles

My mean, mean Rumblemum is off cavorting with foreign cats, so I find I must make do on my own *sniffle*

Rumbledad has sent her this video so she can see her REAL cats, and how we hardly miss her at ALL *sob*.

I've almost worked out how to open my toy chest to get at my Silvervine Fishies! That Ham came over to help, but he's not as clever as I am.

Before you know it I'll have figured out how to open my own cans of food!

Here is a picture of the far-away pussycat that she is cuddling. I notice a slight resemblance to ... WAFFLES!? *dun dun dunnnnn*


Is this a coincidence? Could it be that this is a relative of Waffles, and my Rumblemum is being kidnapped by a Waffles cartel?

Maybe me and Hammy need to get a jet plane and sort this out.


A note for my Twitter pals - there's a big Twitter party on Tuesday Nov. 13 from noon to midnight EST - hashtag #BlogPawty. Here's an invitation: http://twtvite.com/BlogPawtySurprise. I will be spinning my awesome tunes starting at 1pm EST, so be sure and stop by!

Posted by dArtagnan Rumblepurr/Diego Hamlet Moonfur at 11:05 AM 44 comments:

So many excellent theories, and so many willing to help! Some interesting questions arose from yesterday:

(1) Andrea and the Celestial Kitties made a comment that got us thinking: Waffles looks a LOT like that handsome orange fella Wally from the Island Cats. AND both their names begin with a 'W'... coincidence?

(3) Miss Penelope raised the theory that Waffles could be a figment of our imagination. I have to admit that I wondered this myself. We all know Glogirly is highly skilled at photoshop - could this be a clever illusion (like those photos where you can see more than one thing... those freak me out)

(4) Da Tabbies o Trout Towne think that "waffles be de huzband oh katie; they meeted at a salmon swap bak in september N it wuz lovez at furst site.....at de salmon that iz...then it wuz loves at second site when they sawed each other.....let uz noe what we can due ta help find him....we still haz de code ta de spiez plane from R visit a few bak !!!" This is an intriguing idea, but I do not want to believe that BOOTIFUL Miss Kaite has a husband *sniffle*

(5) Elyse K suggested we stake out Catbucks, the last known whereabouts of Waffles. An EXCELLENT plan - I suggest that we take shifts till this mystery is solved!

To all of you that have volunteered to help - I give my hearty thanks, and say that we start acting on some of these tips!
Please don't forget to vote for Miss Katie - today is the last day and she deserves to win! http://enter.thefriskies.com/katie-is-accused/
Posted by dArtagnan Rumblepurr/Diego Hamlet Moonfur at 3:52 PM 30 comments: 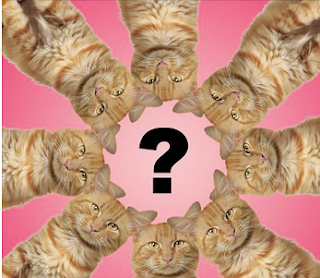