I SEE you in there - Rumblepurr

I see you, and I KNOW you have tuna SOMEWHERE. 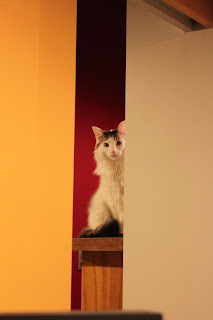 Inigo update, and answering some questions from yesterday - Rumblemum

Inigo has spent the day with the kitty cardiologist today. The news is better than it was a couple of days ago, but still not where we'd like it to be. His weight, while still low, has stayed the same. His kidney function is the same. The fluid in his chest is the same, and his BP is slightly better. The vet was much more optimistic, especially when combined with  stories of how well he's been acting. I haven't heard anything about the infection (I forgot to ask when I rang, and I couldn't go with Rumbledad to pick him up as I had afternoon meetings - Rumbledad isn't home yet)

We've gotten so many sweet emails with suggestions, including some really good natural options. Thank you to you all.

Now! To answer some questions from yesterday:

Lita suggested some brilliant food ideas: Thank you so much, we've got an Asian grocer really close to us, I'll get some chicken essence tomorrow!! What a great idea and I'd never have thought of it!

Fin thought maybe it was a cold that was making it hard to smell the food: Actually I thought exactly the same thing, because his nose was so goopy. The vet's said that it's dehydration that's making his nose really dry, and we're taking him in every other day now to get him hydrated.

To you all - I'm so grateful for all the kind words, and I tell Inigo every night how much love comes from his online friends. Thank you so much for your support and suggestions.
Posted by dArtagnan Rumblepurr/Diego Hamlet Moonfur at 6:14 PM 37 comments:

We took Inigo to the kitty cardiologist yesterday, he has been seeing her at least once a week since this whole thing started. I was very worried that he wasn't eating, and his nose is very black and crusty so I rang over to have a quick chat.
The news was not good. Inigo has (in a very short time) lost over a kilo (over 2lbs) which is a lot. He's very thin. The vet was worried about that and the fact that he's not really eating.
She's also said that his blood pressure is very, very low and his kidney function has declined.
I told her how loving and sweet he'd been over the long weekend, and how he was always running for cuddles and kisses - he was very much himself.
The vet felt that this was a very positive thing, and she commented over and over about what a sweet and special boy Inigo is. She said that his quality of life doesn't seem to be suffering, he was quite responsive to her as well... but we're really starting to move into dangerous territory.
She rang back a little while later, and she thinks it's possible that he has an infection that's causing the low BP and kidney issues - she's running some tests to see if that's maybe what the problem is.
I have to be honest - if it wasn't for the weight, I swear it's like the old Inigo is back. He's just so loving and he tried to make a break for it when I got home - he hasn't done that in so long! It's hard to believe he's sick when he's so fine.

We're trying everything we can to get him to eat. Rumbledad picked up some scallops for him, and we're trying to tempt him.
Thank you all for asking after him. I think I can't believe that he's anything less than well because of all the improvement. He's back at the cardiologist tomorrow, and we should know the results of his tests.
Posted by dArtagnan Rumblepurr/Diego Hamlet Moonfur at 8:19 PM 48 comments:

After the LONG weekend - Rumbles 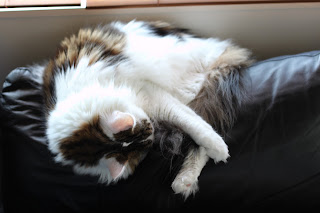 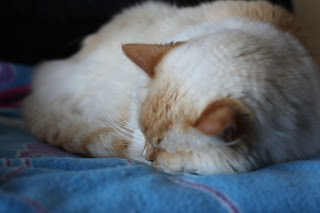 We've switched computers here, the computer we were on before had all our blog friends saved to a browser. Unfortunately in the switch we lost the blogs that we'd only added to the browser (and not our main list that's server based).

So, if you haven't heard from us in a while, please let us know so we can add you to the tool we're using now.
Posted by dArtagnan Rumblepurr/Diego Hamlet Moonfur at 3:44 PM 36 comments:

My kind pal Ginger Jasper sent us a wonderful care package from far away!! I am so thrilled by the contents!!

There were nommy treats, the kind we don't get out here... a new blankie that is the same color as my new bed, a cricket on a stick toy (Rumbles goes mental for it *sigh*) and, the most favorite by Rumbles... a tent.

Of course Rumbles can't do anything the normal way. He roars into the tent, knocks it on it's side, and then tries to chase things while he's caught in the walls.

I was walking along, minding my own business when Rumbles tries to charge at me! That is, he tries with his FRONT half. His back half was standing on the tent, so he ended up getting tangled even MORE up and having to do a somersault! Rumblemum was killing herself laughing, and she said my face was like I was mentally shaking my head and saying 'the boy ain't right' (that is what I was thinking, she knows me well!)

So here are some photos of Rumbles in his new tent. You can see it's on it's side (the walls are mesh and the bottom is black - you can see it behind him)


Thank you SO much GJ. I really love my new blankie.
Posted by dArtagnan Rumblepurr/Diego Hamlet Moonfur at 4:27 PM 41 comments:

A question for my friends - Rumblepurr

I ask you... what makes a normal, handsome man cat go from this:


To THIS:
Must be Halloween in the air!!

Inigo is doing well, but he's very thin. Rumblemum is trying to fatten him up (and me in the process! heh heh heh) He has much more energy these days, and that makes us all so happy.
Posted by dArtagnan Rumblepurr/Diego Hamlet Moonfur at 5:43 PM 34 comments:

Beware of Bengals! They attack from the sky! - Rumblepurr

One of the wonderful kitty friends I made in the NZ Next Top Cat Model contest was a handsome Bengal named Darwin! 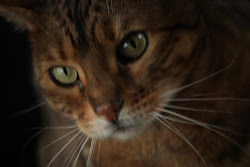 Darwin has his own blog, and he has his own PLANE!! So he could visit some of the far-away kitties (and most importantly he can take me to visit the BOOTIFUL ladycats)
You can visit Darwin here, he's new to blogging so doesn't know many people yet :)

Happiness is a warm bed - Inigo

You may recall Rumbles talking about how he was snoozing in MY bed... well I'm happy to say that I've made my claim!!

My bed plugs into the wall and it makes it WARM!! I can't WAIT! Rumblemum says I have to wait till she gets an adapter... I don't know what that is but she better get it NOW.

Many thanks to the BOOTIFUL Baby at Nip and Bones for sending my wonderful bed!!
Posted by dArtagnan Rumblepurr/Diego Hamlet Moonfur at 6:38 PM 44 comments:

I tell ya, there is no place like home!


It was back to the vet for a check-up for me today. The nurses and my vet must really like me, I got the BEST cage with a sheepy bed! (I can't have one of those at home, Rumbles eats the sheepy bits *sigh*)

My blood pressure is very low again, but the nice vet says that's just because we're still adjusting my meds. They've changed them to fix my blood pressure.

All the vets and nurses say that I'm the first Ragdoll they've seen that actually has the Ragdoll trait of going limp in their arms! (I do it to charm them, and woo over any bootiful ladycats that might be looking)
Posted by dArtagnan Rumblepurr/Diego Hamlet Moonfur at 7:01 PM 64 comments:

Rumbledad took some photos of us with our manly cuddle time.

Rumblemum loves the first photo, even though it's not the best shot... the look on Rumbles face is all innocence, and you can sort of see Inigo's crimped hair on his head!

You guys better lock up your lady cats! - Rumbles

I've had a photoshoot, and I'm lookin' FINE if I do say so myself!

And the Inigo update! He went back to the kitty cardiologist today, and one of his lungs that was squished by the fluid in his chest is healed!!

The other is still a little bit impacted by fluid (and he did have a bit of fluid again) but all in all this is very good news. His kidneys are ok, his blood pressure is fine and he's nomin' LOTS.

I'm still being extra good to him... we may have snuggled (very MANLY snuggles) on the end of the bed last night.

I'm quite impressed at the better quality and quantity of noms I'm getting because of him!! Some days it's like a buffet here!!
Posted by dArtagnan Rumblepurr/Diego Hamlet Moonfur at 8:17 PM 53 comments:

Rumblemum HOGGING our BLOG *huff*  And she deprived you all of our photos!

Here are some of Inigo on his first day back. He asked me to say please don't laugh at his shaved spots (there is a very prominent one in his ruff) I've not laughed at him yet cause I love having him back. Maybe in a couple of months I'll laugh, just a little. 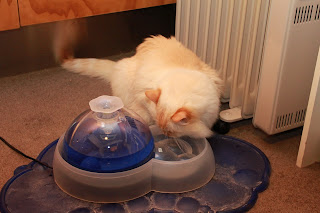 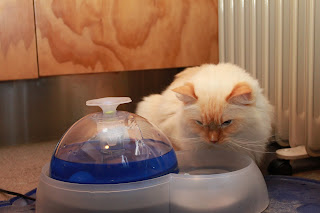 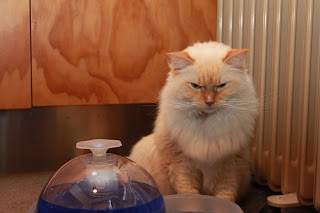 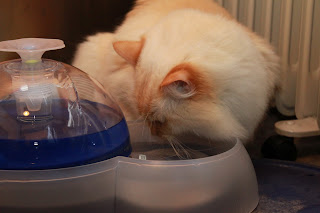 I feel a bit sorry for him. Every time he does ANYTHING the humans get all excited and praise him. He has some noms? Praise. He drinks some water? Photos and praise. He goes to the litter box? Praise. Seems like a lot of pressure to me.
Posted by dArtagnan Rumblepurr/Diego Hamlet Moonfur at 3:58 PM 56 comments:

We got in to the vet, and he was sitting up properly. When we went over, he gave a very demanding MEW! (he hasn't done that in SO long!!) He kept trying to get out of his cage (which is also good progress!)

We put him on the floor, and he walked right into his cage and went MEW! like he was saying 'take me home!'

He's had some noms (thank God) and drank some water from his fountain... I don't want to feel too happy, but...

And excellent timing - my package from Nip and Bones arrived!! It had a special heated bed in it for Inigo (I'd ordered it before he got sick) and some toys for Rumbles. It had a Yeowwww nip toy that Rumbles is absolutely MAD about!!! I've never seen him react so strongly to nip! It's very strongly scented, it arrived at my work and another cat lady wandered by and commented that she could smell it - so it must be strong! I had to put it in a tupperware container in a drawer to hide it - we don't want to over stimulate Inigo.

And also - Perry the Birman's mummy had sent us some Greenies Pill Pockets!!! How perfect is that!! She sent Rumbles some nommy Party Mix so he wouldn't feel left out. He is having an excellent day overall *hee hee* and he's being very sweet to his big bro - not a single hiss out of him!

My friends... I feel very blessed today, not just for having my boy home, but also for all the kind support from you all.
Posted by dArtagnan Rumblepurr/Diego Hamlet Moonfur at 7:53 PM 52 comments: