Rumblemum gets to work from home on Fridays, and I get to be her supervisor.

Without me, nothing would get done.


If you have a moment to spare today, please stop by the Sparkle blog to leave a comment on the comment-a-thon in honour of Miss Sparkle. Her wonderful human will contribute $1 for every comment to Tabby’s Place - they do amazing work and it's a beautiful tribute to Miss Sparkle's beautiful life.
Posted by dArtagnan Rumblepurr/Diego Hamlet Moonfur at 6:56 PM 22 comments:

Rumblemum has been trying to get a photo of "her big handsome Ham" in honour of this being his calendar day on the CB calendar.

He says he won't look at the camera for anything less than two packs of ham.

As his agent, I claim 100% of any ham revenue gathered from his image, so I'm trying to encourage him that he needs to have a photo taken. He's still refusing (I think he may be smarter than I suspect...)

I figured you guys must be getting sick of Sunday Ham, so here's a few shots of me in action. I'm a very mighty hunter, as you can see. My prey? A blue spring. I am very careful, they say the blue ones are the most devious ones of all...

The sad part of blogging

We lost a beautiful friend today, one of our very first friends from the blogosphere.

Sparkle the Designer Cat was more than a beautiful ladycat, she was kindness and an encouraging voice for us. Her stories about life with Binga and Boodie made us feel like they lived next door. Funny and educational and never dull... Sparkle was the total package. 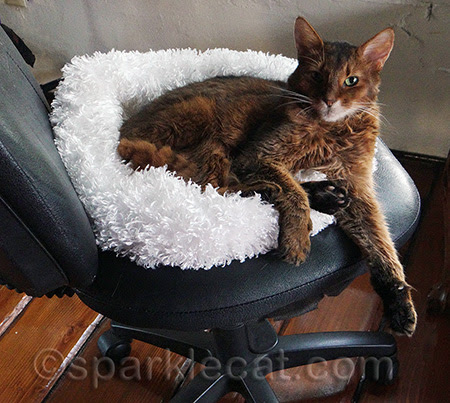 Our heart goes out to her family. She will never be forgotten.

Comments are closed on this post, but if you could please stop by her blog and leave one for her family.
Posted by dArtagnan Rumblepurr/Diego Hamlet Moonfur at 10:40 AM No comments:

RUMBLES! It's time to PLAY!

Not nap time! NO NO! It's PLAYTIME!

Hello everyone, it's HAMMY!! I know Rumbles posted some photos of the new tower a couple of days ago, but he neglected to post any photos of ME!

We both love the tower, but it's a bit of a competition as to who goes where. Lately I've been enjoying being on the very, very top!

I'm pretty sure Rumbles doesn't mind me being the tallest kitty in the whole world. I think he quite likes it actually.