Winter is the time for snuggles! 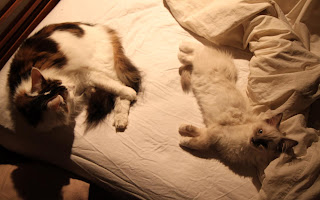 That darn kitten... he lay on the bed RIGHT by me, then he kept inching over!

I'm DIEGO MOONFUR! I've taken over the blog while Rumbles is snoozing!

Rumbles likes to pretend he doesn't love me, but I know he does. He lets me eat his food when I push him away from his bowl, and  he ALWAYS watches me when I cuddle with the Mummy (hmmm... MOONmummy has a ring to it)


He loves our playtime. Today I was pretending to be a ninja and he held up one of his gigantic paws so  I could try and pounce on it!

We haven't had cuddle time yet, but I know it'll happen.

I'm so glad I have such a GREAT big brother.

I'm HOME!!! Can you believe it??? How come I had to go to the vet and the little one got to stay home and cuddle MY Rumblemum and dad?

I'm feeling much better (outside of having some missing floofs on my tum) and I'm trying to get that Lance Corporal in line. I can't believe his nerve tho! He thinks he should eat food BEFORE I've sampled both bowls and picked the one I want! And while he MAY have a 'Minimew', he sure uses it a lot!

I want to thank you all for your kind wishes, the candles you've lit and support for Rumblemum while she was rumble-less. As a token of my gratitude, I'd like to mail out one small kitten to anyone that would like him (heh heh heh)

Note from Rumblemum: We will not be mailing out any kittens *looking pointedly at Rumbles* but I do want to say thanks.There was a bit of a snafu when we got Rumbles back (I'd talked to the vet in the morning and she was wanting to keep him an extra day, I missed out on a call later in the day saying he could come home. By the time we got there the vet was gone for the day and the vet nurse let us discharge him but we don't know what the exact results were. We're taking the Lance Corporal in for his   micro chiping tonite so we'll hear more then)


We saw the vet, and the diagnosis is that his bowel was inflamed because he passed something 'traumatic' (that would have been the string) So this would be the best possible outcome, thank heavens!!

The Lance Corporal was very good at the vet, and got a lot of attention (his favorite thing besides Greenies! *lol*)
Posted by dArtagnan Rumblepurr/Diego Hamlet Moonfur at 5:57 PM 67 comments:

We're hopefully going to pick him up tonight. The vet wanted to monitor him for a few days, but he's doing well so fingers-crossed we get him back today!

Thank you all for your kind words and thoughts. We still don't really know what the problem is, but the vet doesn't seem too concerned thank goodness.

I can't believe this is happening again.

Several days ago we thought that Rumbles had chewed thru and swallowed the string from his Da Bird toy.

I rang the after hours vet, their advice was to keep an eye on him, if he was off his food or throwing up then bring him in. He was doing fine up till a few days ago, so we ran him to the vet.

The vet took xrays and ran a test to make sure his insides were ok - he looked like he was doing fine till last nite. In the early morning hours he started throwing up like we've never seen before.

We took him into the vet, who was sufficiently concerned to want to do exploratory surgery.

They're still not sure what's wrong - there is no sign of the string, but he's got inflammation and the vets want to monitor him over nite.

Please purr for my boy, he's in the same cage as Inigo, and it just felt so sadly familiar. The vet he's at is  (in my opinion) the very best one in town, so he's in good hands. I just won't feel better till he's home with me.
Posted by dArtagnan Rumblepurr/Diego Hamlet Moonfur at 7:24 PM 139 comments:

I can haz Zzzzzz? 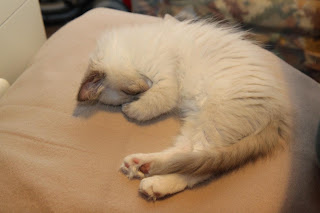 We're playing lots now, but no cuddles yet. Rumblemum and dad have agreed on a name - his first name will be Diego, but not sure yet about his last name yet.
Posted by dArtagnan Rumblepurr/Diego Hamlet Moonfur at 8:55 AM 57 comments:

He's starting to grow on me

Still no real name for kitten, but he's got a new nickname... Rumblemum is calling him 'DB' because he likes to go up on his back paws and dance around like a little bear! (DB = Dancing bear)

We've starting playing chasies. Rumblemum cracks up every time she sees the wee kitten chasing me down the hall (it's not THAT funny) She gives me treats cause she sees how gentle I am with him - we were bunny kicking each other and I was very careful not to hurt him.

I can almost hear you all SQUEEEEEE-ing from here...

The little guy still doesn't have a name... I think he may end up being 'Kitten'!
We're getting along lots better now that he's stopped hissing at me! He did try to leap onto my tail last night, which surprised both of us...
Posted by dArtagnan Rumblepurr/Diego Hamlet Moonfur at 4:14 PM 56 comments:

Posted by dArtagnan Rumblepurr/Diego Hamlet Moonfur at 11:43 AM 49 comments:

Some photos of the Lance Corporal

I'm not sure about this kid at all. I worked up the nerve to hop on the sofa with him... and he HISSED at ME!!!!! I didn't want to upset him, so I ran away again to the bedroom.

You can see he's settling in quite well. 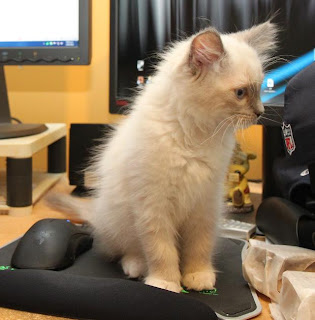 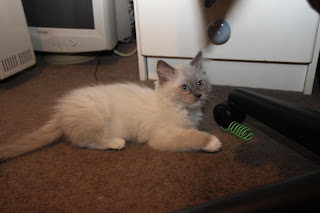 Posted by dArtagnan Rumblepurr/Diego Hamlet Moonfur at 7:14 AM 60 comments:

All bootiful lady cats must NOT read this post

The Lance Corporal has arrived, and is quite happy in his new room with MY toys... Rumblefolks are amazed at how easygoing he is. He PURRS when you touch him, and he loves to play!

Our first meeting however... (ladies please look away now) I may or may not have ran away. From a kitten. That is one tenth the size of me.

I'm now ignoring him. He's in his room, behind closed doors. Will update on progress.
Posted by dArtagnan Rumblepurr/Diego Hamlet Moonfur at 7:22 PM 42 comments: