This is why mummy doesn't try to photograph treats... Inigo

A lot of you were asking what was in the box yesterday. Mummy foolishly decided that she would attempt to take a photo of some of the loot for today.

She laid it out, and in milliseconds SOMEBODY had his nose (and bum!) in everything. 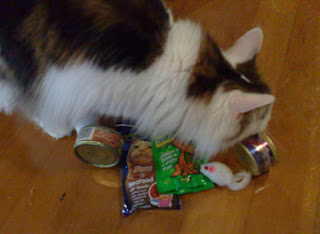 He moved away, but as soon as the camera was going to click, he was back in the shot 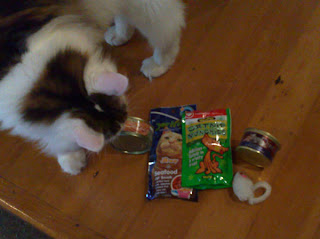 Mummy foolishly thought it would be cute to take a photo of the little white mousie with his new girlfriend - the little pink mousie. So she placed them down together away from the treats and.... THUD 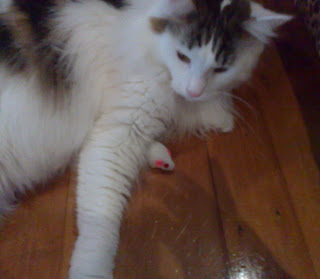 You may wonder where the pink mousie is? Under some gigantic rumble-head, that's where! 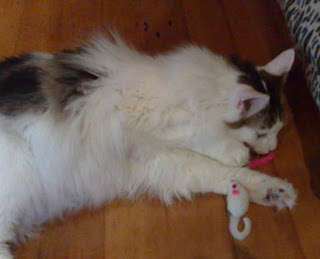 Rumbles realized that there was a mousie under him, and that it needed some noming 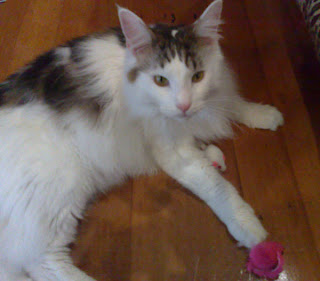 Then he flung to paw-ing range - while poor little white mousie had to watch! The horror... the horror!!

*sigh* Now do you see what I have to put up with every day? 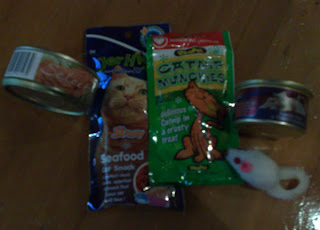 Mummy finally got the photo she wanted. This is only some of our loot - but the can on the left is SALMON!!  Thank you pretty Pollypuss!!

I hope you managed to get some of the loot off him for yourself, Inigo!

*sigh* I started to eat one of the treats... ZOOM! There was a Rumblenose snarfling it out from under me.

What a great collection of goodies. Tell Rumbles to post himself to my house and he can share my snacks.

Hehehehe. We think all moms know what you're talking about, Inigo.

It's a lot like that here with Samson. What a great gift you guys got!

We understand. Everything has to be looked at and checked out, and certainly tried out. And then checked again. Our function in life is so important and we so misunderstood.

I'm sure it was full of irrisistable smells and crackly fun! It's nice to share :).
~Co9T

What a lovely treat it looks like! Make it last over the weekend!

You hit the jackpot there!

Great treats! And we love the pink mousie. We make our mom take treats and toys into a room with a closed door to photograph them.

Looks like you have some treat competition! My bean would have a hard time getting pictures of some treats with just one cat. :)

What a treasure chest of goodness! Your human shoulda left you guys alone so you can enjoy your loot!

That is a lot of neat stuff! We think the poor pink mousie needs you to protect him!!

Eat some for us, Mum doesn't give us treats much anymore because she can't find any diabetic-safe ones.

Looks like you got some great stuff! Although we wanted to see what you gotted, we do understand the difficulties of your mum getting the photos, we never make it easy for our Mommy, either... MOL

purrs and hugs,
The Kitty Krew

Those goodies and meeces wud be hard to resist!

WE have that same problem with taking pictures of treats and gifts - someone always barrels in and starts playing with everything so you can't just get a nice "stuff" picture!

What a pawesome package you guys got. And not for nuthin'...this post really made mommy LOL!!! You are both so silly!!!