Cuddling the mummy is a full time job - Inigo

Mummy and I have a long standing tradition of cuddles. Before Rumbles came, I would sleep along side her with my head on her pillow and she would put her arm around me like I was a teddy bear. I'd purr her to sleep.

After Rumbles joined the family, this lessened... mostly because Rumbles decided that all the mummy cuddles belong to him *harumph* I couldn't be fussed to argue it. I was a little put out to see him take up MY spot next to her, with HIS head on her pillow getting the teddy bear cuddles... but a good big brother puts up with such things.

Since mummy hasn't been feeling well, I decided it has something to do with the inadequacy of the Rumblepurr cuddling. Because of this, I've taken over my rightful cuddle spot. 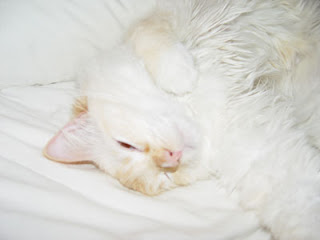 Rumbles has not taken the news of his usurping well.

Last night he jumped on the bed and stood there, waiting for me to move. I didn't.

Then came the nudge. Gentle at first, but more insistent. I ignored him. He tried the nudge on mummy but she ignored him as well.

He moved to the bedside table and thought over his options. A few moments later came the POKE. First he poked me between the ears. I didn't react. Then he poked mummy's face. She didn't react.

Victory for ME!!! Rumbles retreated to knock things off of shelves, and I slept the night content in my cuddles.
Posted by dArtagnan Rumblepurr/Diego Hamlet Moonfur at 5:24 PM

Hai, Inigo, can you come give 'stand your ground' lessons to Tigger so Jigsaw won't chase him all offur da howse? Mom keeps tellin' him, "iffen you don't run, he can't chase you." but Tigger no lissen.

Fanks you fur yur comment on mom's poem. She knows it iss sad, but she meant it to inspire folks to make a happy ending, and take home an anipal from da shelters. ;-)

I can't believe your mum is still sick! I hope she gets better soon.

Yoor poor mommy ~ we hope she is betterer soon. We squabble over prime place on the bed too ~ but I always win!

Sibling rivalry - you gotta love it. As long as it's only for cuddles of course!

You have to learn to share. It is very, very, VERY hard though.

I am surprised you he didn't resort to the bitey!!

I am glad you won back your rightful place, Inigo. I sleep with my mum in a very similar way, and sometimes have to fight off my sister with a WHAP on the nose.

We are sending healthy purrs to your mum!

That kinda happens in our house too! Glad you stood your ground...and I know your Mum feels better!!

PS. Thanks for stopping by my blog!

Hey, how about one adorable mancat for each side of your Mum? She's sure to get better quicker with both of you on the job!

Stand your ground! The snorgle position is very important. And we hope your Mom gets better soon.

Hope your mom is better soon. It's a lot of responsibility, taking care of her, cuddling and all. I'm happy to see you are up to the task!!

Any chance of an amicable arrangement in which your Mummy could get double-cuddles?

Good for you....stand (ooops, lay) your ground, and we know that your cuddling will have your Mommy well very soon.....xxxxxxxxx

Great job on sticking with the mommy. Maybe he could lay on the other side, like a kitty sandwich!

It's great you didn't like anykitty come between you and your mommy's cuddles! Maybe you both can cuddle with her and give her double purrs to get better soon!

We are glad you stood your ground and got your rightful place back. We don't argue over position, I Eric, like to sleep on the pillows by the Beans heads and Flynn likes to get under the covers and snuggle up to mum.
We hope your mum is soon feeling better.

Well, I think he should let you sleep there - after all, he did the first usurping, didn't he? He just needs to find a nice secondary place to sleep when you are in your spot.

That's what brudders are SUPPOSED to do! Way to keep your ground!!! Hope your mommy feels better!!!

The nudge, then the poke. Classic moves. But good you held your ground. Your Mom should be feeling better already.

Why can't both of you snuggle with your mom?

Mom says if you will email her with your snailmail address, we'll send you a card so you can have me under your Christmas tree.

That is such a delightful story. Indigo finally got her spot back. Poor Rumble - he nose is really out of joint now! What are you going to do to get even Rumble?

Maybe you could take turns?

Sometimes you just have to stand your ground. This happens a lot at our house too.

We hope your mom is feeling better, but how could she not with purrs and cuddles.

So, are you planning to move to Hawaii for the surfing or the TUNA? :-)