In case any of you doubted that my brother is a strange one, I have further proof. This is how he likes to sleep. 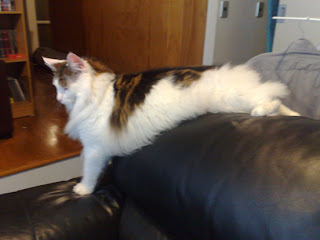 Yes, he actually is asleep in that photo. He was like that for about a half an hour. Daddy calls it 'Independent front and rear Rumbles' because he is soooo long that his front half doesn't know what his back half is doing most of the time. 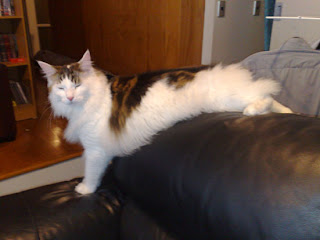 He became aware that he was the subject of discussion and photos, but he wasn't really sure why. It didn't prompt him to move. 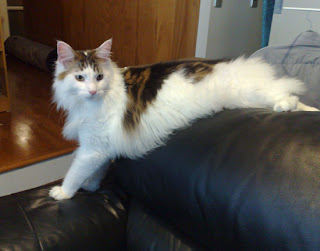 Nope. Still not moving. But fully awake at least.

He sleeps like that quite a bit, I don't know how he does it.

It's hard being the normal one in the house.
Posted by dArtagnan Rumblepurr/Diego Hamlet Moonfur at 4:28 PM

Hai, Inigo...
Dis iss Munchkin :::blushing::: you iss so sweet to wish me for Chrissymouse! I don't finks my human haz enuf green paper for dat trip, either..
I guess we will jus' haz to haz a long-distance wish-ful-ship. :::sigh, swoon:::

This is amazing I must show my friends your pose!!!

I rest my khase AGAIN!

That is certainly the most unusual way to sleep that we've seen.

That sooo does not look comfy!

That is so silly!

What a strange way to sleep! He's ultra cute, though!

You're full of surprises!

I am very impressed with this sleeping method and, as you know, it isn't easy to impress a cat. FAZ

Sniffie and the Florida Furkids

Wow! How does he get to sleep this way?
Should be very comfortable for him!

Haha Rumbles, you are a nutcase!

We are well impressed, Rumbles!

We don't know how he does it either!

That is a crazy extreme style of sleeping. I prefer to sleep curled up in mum supermarket shopping bag.

How in the world can he be comfortable?

It does not look comfortable, but it seems to work.. Hugs Gj x

Teri and her Stylish Cats said...

Maybe he is doing subliminal exercises to keep buff?

Lol. What a great picture. It looks like his front part fell asleep while waiting for his back part to wake up and join him to wherever he was going to do whatever and is forgotten anyway.

Ivan and Izzy from WMD said...

well, that's just part of being a Coon, Rumbles. We ALL sleep funky I think. At least that's what mombean says!

Well, I must say I find the mentioned pose very comfortable, I don't see what all the fuss is about? Hm, maybe it's a Maine Coon thing... my humans sometimes say things like that too *shrugs*

RUMBLES! You too cute! Dat is so funny but I bets it is very comfortables to you huh! Momma say she never seen a cat do dat befores, what does she knows anyway MOL