First I'd like to tell you guys a little story about my 'friend' from Wordless Wednesday.

It's actually a candle holder, when it has a tea light in it the eyes glow green! Rumblemummy likes it very much, it was a gift from a friend.


Rumblemum told me that when Inigo first came to live with her and Rumblepop he was used to having other cats around. Rumblemum thought he was a little lonely, and this proved to be true when Inigo tried to make friends with the statue!!

He was convinced it was another real cat, so he gave the statue a tap with his paw and backed away, thinking the 'cat' would run after him to play!

Poor Inigo, it took him a while to figure out that he wasn't going to get chasies with that kitty!

So now on to my FOXY Friday pick...

Miss Suey from Forever Foster is such a lovely little girl, so elegant and beautiful, the only thing that could enhance her beauty is her being able to fish! 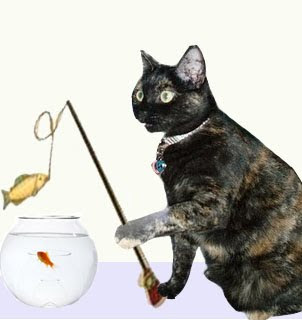 I wish, I wish, I had a fish... and a Suey cuddle!!!
Posted by dArtagnan Rumblepurr/Diego Hamlet Moonfur at 6:05 PM

Miss Suey is beautiful. I hope that she enjoys her fish.

Love the story about Inigo and your 'friend'. It's a great candle holder. SS will have to look hard for one like that.

How funny about the cat candleholder and Inigo thinking it was real. I won't even acknowledge my reflection in a mirror.

I think we would all like a Suey cuddle! Meoow!

We think that Suey is just PERFECT!

Suey is a pretty girl!

We love Suey!
The story abot the cat statue is very sweet.

Suey is very pretty and we love the picture of her fishing. Good job. And what a cute story about Inigo. Hope you all have a wonderful week end.

Oh my goodness! I am lucky my furs are dark, because I am blushing as red as a tomato underneath!
Many purrs to you Rumbles, and a great big cuddle:)

We love Suey!! And we hope she catches a fish soon!

Suey is a classic beauty!

What a foxy tortie! She's a beauty!

We can picture the tap Inigo gave to the statue. Our Mom calls that the 'hit it to see if it's alive' whap. She thinks that is so funny...

Aw, our human thought the story about Inigo and the statue was sweet but sad too. We're glad he's not alone anymore, attempting to play with it! :-)

Oh my good pal Suey! We all just love her! Great choice for Foxy Friday...and may she catch lots of fishies!

That is lovely.. Mum would like one like that.. Been having trouble with leaving comments.. sorry.. Hugs GJ xx

What a cute photo of beautiful Suey fishing!!MOL...The Inigo story was cute, but we're very glad the boys have each other now...Have a great weekend...xo...Calle, Halle, Sukki

She is a beauty.......we hope she catches some fish and sends some to you. xxxxxxxxxx

You sure picked another winner!

Oh, poor Inigo! It must be hard to make friends with a candle holder thingy!

At least he has you now, though. *hugs*

Fishing would be a good talent to haz, but I no fink kittehs needs hoomans' fishing polez. MOL

We enjoyed the story of your friend from WW!

I forgot to say I tagged you in a game on my blog. I hope you can play.

Looks and skills, you can't beat that combination.

That is a very cute story about the candle!!!

A foxy lady who could bring you all the fish you want? Wow!

That's a funny story about Inigo. I hope he's not embarrassed that you told it. It's cute!