LOVE this challenge! Got a bag fulla NOMs, and I have to sell em! 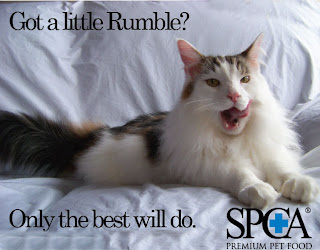 At the moment I'm third highest in donations thanks to all of you -  see the top six kitty fundraisers here. My paws are crossed that I make it through to the next round!

Thank you to everyone that's donated. So far the contest has raised $12,571.48 for charity - an AMAZING amount for all the poor kitties that haven't found their forever home yet, and that total has already surpassed the amount they raised last year!

The next phase is the voting phase - you'll be able to give your choice for the top kitty. Each person is only allowed one vote, and there are TEN bootiful kitties... very exciting!
Posted by dArtagnan Rumblepurr/Diego Hamlet Moonfur at 9:17 PM

I love your ad, Rumbles!

I so hope you make it to the finals. It's gonna be so exciting!

You are a natural model. Love the ad!

Good luck with the contest. We will definitely vote for you.

We'd buy anything from you! Great ad!

That's a great ad! Good luck in the contest.....it's getting serious now.

That is a very convincing ad, Rumbles. Best of luck. Will we have to be Facebook members to be able to vote?

Your ad is wonderful Rumblybumbly. You know I'll be voting for you.

We'd by anything with your picture on it Rumbles!

Great ad, we would buy anything with you cutie face on it. Good luck and keep us posted.

If dey based winning solely on dat ad - you'd take it hands down my friend. Good luck - I really hope you are the winner.

After seeing that lipsmacking endorsement, we'd take ten bags! We wish you lots and lots of luck! :)

We absolutely love your ad! Yum yum! We're purring for you to make it to the finals! Many thanks to you and the other contestants for raising so much money to help other cats.

Rumbles, we love your ad!!! And we hope you make it to the finals!!

Oh Rumbles, we just love your ad! It's purrfect! We are purring furry hard that you make it to the finals! It's pawesome how much money has been raised to help the other kitties!

have a happy weekend you gorgeous kitty!!!

Gorgeous Rumbles - you are a natural!!!! Well done with your fundraising and GOOD LUCK!!! We have all paws and fingers crossed for you!

You have my vote you handsome devil.

You have my vote you handsome devil.

Great Ad Rumbles. You are #2 in the donashuns now! Go Rumbles GO!!
Has a great weekend.

I love that ad lots and not only is it great, it's totally you!

We'll take two bags! That is a great ad Rumbles!!

And we just checked out the pages - it looks like you may have gotten a few more donations because the way we see it you are in first place at the moment, which is awesome! You will make it to the next round for sure!

We love your ad, Rumbles, you look so handsome as always...Congratulations on getting so many donations and no doubt, you will make it to the next round=we will be voting from a few computers (from work too!) for you sweetie!...Happy weekend adorable, beautiful boys=we love you both!...xoxo...Calle, Halle, Sukki

Bummer! We thought the ad was to get a Rumbles of our own...but now we see it's for pet food. boohoo!

You still have our vote, Handsome!

I'm so ready to buy some of THAT brand now!

You've done a fantastic job of fundraising, Rumbles! And I love your ad - you struck just the right attitude!

We love your ad Rumbles, you are such a beautifu boy!

That is a great ad. We would buy that. We just checked and it looks like you are just in the lead. We are getting ready to vote for you.

Gorgeous ad, Rumbles! And great job with your fundraising, too! *purr*

I'm SOLD! I'm going right now to buy that food. You are a genius!

Who WOULDN'T want to buy that food now? I think you'd have alot of orders.....

We have given you an award. Come and collect it from our blog.

How can people not want to buy this?

What a PURRfect ad Rumbles! It just couldn't be better. Amazing job with the fundraising! I will be voting! Best of LUCK to mew!